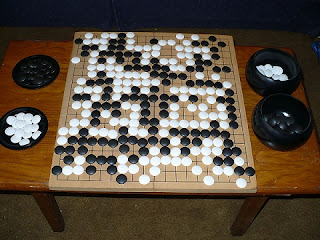 An artificial intelligence program has beaten the European champion of the board game Go. The program beat the champ five games to nil.


The rules are simpler than those of chess, but a player typically has a choice of 200 moves compared with about 20 in chess.
There are more possible positions in Go than atoms in the universe, according to DeepMind's team.
It can be very difficult to determine who is winning, and many of the top human players rely on instinct.

Wowsers!
Posted by genkaku at 5:29 PM