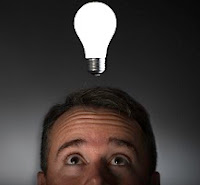 To say I understand it would be a stretch, but the idea that the old incandescent lightbulb might be ripe for a new application after having been beat out by the new-and-improved CFL or LED version ... well, I guess the old fart in me likes discoveries that hark back to a time when I grew up and survived the wasteful, dangerous and morally questionable conditions of my surroundings ... which then turn out not to be all that bad.

US researchers say they have developed a technique that can significantly improve the efficiency of the traditional incandescent lightbulb. These older bulbs have been phased out in many countries because they waste huge amounts of energy as heat.
But scientists at MIT have found a way of recycling the waste energy and focussing it back on the filament where it is re-emitted as visible light.