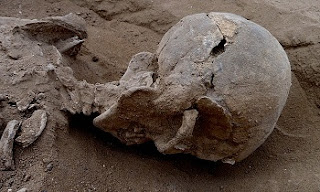 Sometimes I wonder how many times what has been obvious all along needs to become apparent once more and finally, finally enter the heart.


Some 10,000 years ago a woman in the last stages of pregnancy met a terrible death, trussed like a captive animal and dumped into shallow water at the edge of a Kenyan lagoon. She died with at least 27 members of her tribe, all equally brutally murdered, in the earliest evidence of warfare between stone age hunter-gatherers.
The fossilised remains of the victims, still lying where they fell, preserved in the sediment of a marshy pool that dried up thousands of years ago, were found by a team of scientists from Cambridge University.
The evidence of their deaths was graphic and unmistakable: the remains, which include at least eight women and six children, show skulls smashed in, skeletons shot through or stabbed with stone arrows and blades, and in four cases, hands almost certainly bound.

Slaughter, warfare, violent death ... and all of it in a Kenyan landscape rich with food sources for all. Nevertheless, there was slaughter in that day even as there is slaughter today. The tender heart is appalled and repulsed and yet it is hard not to wonder -- however difficult it may be -- if the sentiments are a half a step off the beaten path of what is more obviously human.


The study’s co-author, Prof Robert Foley, is marginally more optimistic about the human condition: “I’ve no doubt it is in our biology to be aggressive and lethal, just as it is to be deeply caring and loving. A lot of what we understand about human evolutionary biology suggests these are two sides of the same coin.”