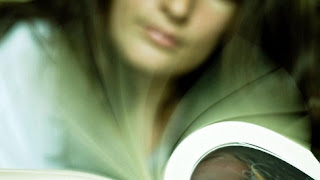 As the books on my shelves take on an undeniable and yet mysterious irrelevance, here comes the BBC Magazine to take a stab at parsing and particularizing the dwindling, dwindling, dwindling of paper volumes. What, if anything, does it portend? Naturally there are still enough people who were weaned on paper books to cry out, "the sky is falling," but since it's actually happening ... well, what about it?

The first thought into my mind is that if information is widely available on the Internet ... who cares? The answer to me is, how will anyone know anything if the electricity goes off? But perhaps that's a minor concern. I do sense a dumbing down, a lack of critical thinking that has fallen off into well-heeled bias and belief, but I haven't got the energy to find out if my bias and belief holds water.

What was that John Fowles novel in which a small segment is devoted to a future time in which a shopping list is unearthed and becomes a kind of Rosetta Stone to the past ... replete with ordinary comestibles like balogna? Or did I make that up?

I can't really enter this fray with much gusto. I do know I'm glad I won't be around for the denouement.