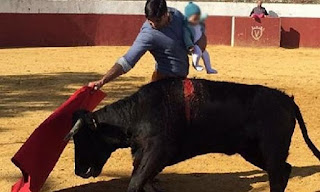 A Spanish bullfighter has ignited a minor firestorm of criticism for posting a picture of himself as he practiced fighting a bull while holding his five-month-old daughter.


There is no safer place for her to be than in my arms. This is Carmen’s debut, the fifth bullfighting generation in my family. My grandfather did the same with my father, my father with me and me with my daughter Cayetana, and now Carmen.

Child safety and a general distaste for 'fighting' unarmed animals makes up the bulk of the criticisms. Of his style and expertise, one Spanish critic said, "Rivera’s faced a lot of bulls, and for that he deserves credit. But he’s boring to watch; he has no aesthetic merit."

I have only seen one bullfight. With luck, I will never see another. While I dislike white-whiny complaints about bull fighting -- in about the same measure as I dislike mojo-laced defenses of the activity -- I found watching an actual fight so viscerally repugnant that I had to leave the arena where I had hoped to sense a bit of what Ernest Hemingway et al. could go on and on about.

Man contrives a situation in which he faces death and feels that much more alive... grow up!

Besides the taking of a life after goading an animal with the help of several other armed men, I dislike the implicit and explicit demand that this activity should be honored and acclaimed. Sure, it takes more balls than I've got but, on the other hand, I don't want my courage defined by such contrived means. A storied and honorable profession? Sorry, I can't buy it. Killing as a means to eat I can see. But killing as a means of flonging your dong...?

If someone were to open a sunny arena and introduce one bull and one man and invite them to interact as a show of honor or worship or skill ... that strikes me as possible, if still a bit self-centered.

Author Mary Renault wrote a novel called "The King Must Die" in which the bull-leaping of Crete played a heart-pounding role. Now that struck me as ballsy -- if a bit looney -- and honorable. 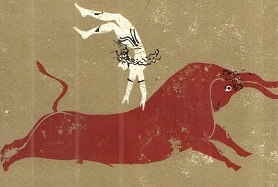