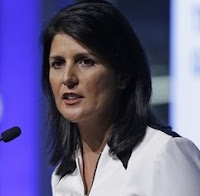 For reasons as flimsy as a milk-weed seed, I like South Carolina Governor Nikki Haley, the Republican who offered a counter-point to President Barack Obama's State of the Union address on Tuesday. In my flimsy mind, Haley provided some welcome counterpoint to the utter flatulence and Islamic-State rhetoric of other Republican presidential hopefuls. True, she is carrying some negative baggage when it comes to education and health care, but at least she seems to be someone who can think about and defend her positions. She seems to care about the country. It doesn't hurt that she is a handsome woman.

Some Republicans have dubbed Haley as apostate when it comes to representing Republican values ... which, as far as I can figure out, the minority Republicans have yet to enunciate in a coherent and convincing form. By calling out Donald Trump (the leading Republican contender at the moment) and his various vulgarities, Haley speaks well of a Republican party that conceded four years ago that it needed to widen its magnetism to include minorities and women.

Haley may not be as smart as the Democrats' darling, Elizabeth Warren, but she strikes me (based, as I say on evidence I have no inclination to bolster) as a person, like Warren, of substance. I like to think that even the party I dislike cares something for the country -- the whole country -- it seeks to administer.

Some small voice in my ill-informed mind says, "Nikki Haley for President!" It isn't going to happen and if it did, she would get stomped. I wouldn't be surprised if she got a vice-presidential nod, behind some candidate more deserving of a VP profession.

It's all pie in the sky, but in this fleeting and ill-informed moment, I like Nikki Haley.