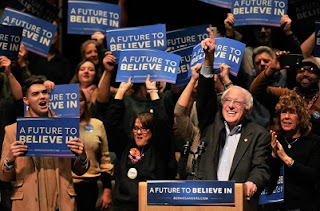 On Jan. 4, 2016, the Daily Hampshire Gazette (my local paper) ran a front-page picture of Democratic presidential hopeful Bernie Sanders as he made a weekend appearance at the nearby University of Massachusetts. The candidate was shown surrounded by galvanized sign-waving supporters whose placards read, "A Future to Believe In." The photo bore an big-type over-line that quoted Sanders' saying, "People want change."

On that same Jan. 4, the BBC ran a lengthy investigation of the long-held and widely-believed tale of the candiru fish that swims in depths and shallows of the Amazon River. The fish may be real enough, but the grisly tales it has inspired since early in the 19th century are questionable at best. As the over line to the article puts it: "The story is that the fish swims up a stream of urine into a man's penis, then eats it from the inside. But is there any truth to it?" (Ladies, do not feel left out. You too are reputed to be at risk. But it is men who have told and embellished the tale over time and we all know how men feel about their exceptional attachments.)

Not to spoil a good tale prematurely, but one researcher, Stephen Spotte, is quoted in the BBC story as saying that the chances of a candiru swimming up the urinal stream and then living up to its horrific promise as being "about the same as being struck by lightning while simultaneously eaten by a shark".

None of the research alluded to in the BBC story is likely to erase or even revise the tales that swirl in the Amazon basin. The tale is too good, too convincing, too often repeated. Anecdotes and hearsay and communal tale-telling are simply too compelling and the truth will have to sit this one out. What people "just know" is not to be denied.

Which brings me back to Bernie Sanders and his enthusiasts ... of which I am one. How nice to tell the communal tale that "people want change." The line swims upstream in the mind and is every bit as benevolent in its hopes as the candiru is in its depredations. The excitement and applause can be resounding, warming, and so downright delicious as to sideline whatever the particulars of the truth might be. Is my sense of "change" yours or yours, mine?

It is important at some point to step away from the communal warmth and take a look. A failure to do so is to invite a future disappointment. Is the tale more important and consoling and insistent than the truth? 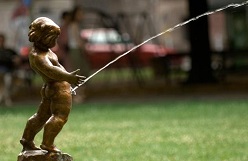 (I'm going to switch this train of thought to a possible column, I guess.)
Posted by genkaku at 9:28 AM