heart of darkness, heart of light 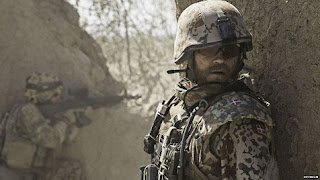 In an age of too much information -- information that blurs and blunts the capacity to see and choose -- it is interesting to see something resembling the truth float to the surface because there is no other choice. Simplicity and heroes drop away in the onslaught of information that is manipulated in one way or another, perhaps for artistic, perhaps for moralistic, purposes. Suddenly the nitty-gritty is all that's left ... the artful tales have all been told and found wanting. Right and wrong deflate and what is left is raw meat ... the humanity of it all. Nothing gets cured in this arena, but it carries with it the advantage that people are doing what they can to stop lying and ducking and camouflaging and uplifting.

The occasion of this muddy and perhaps muddled thinking took its spring from a BBC report on Denmark's entry to the Academy Awards, a movie entitled, "A War."

In the heat of battle in Helmand province, Afghanistan, an army commander with an exemplary military record has to choose to save the life of one of his men, or a group of local civilians. He chooses his soldier. On his return home, he faces charges for unlawful killing. This is the scenario at the heart of A War, this year's Danish Academy Awards entry.

I have no clue whether the movie is any good. Still, it does not feel like Barack Obama awarding yet another Medal of Honor to some riven combatant.