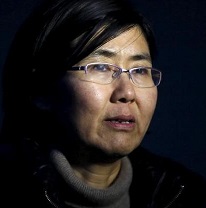 And in the nobody-rich-ever-got-that-way-by-being-nice category, there is the story of Chinese human rights lawyer Wang Yu.

Chinese authorities have formally arrested China's most prominent woman human rights lawyer, accusing her of subverting the state, her lawyer said on Wednesday, as part of a crackdown on activists who have helped people fight for their legal rights.
The lawyer, Wang Yu, was taken into custody last July and accused the next month of inciting subversion and "causing a disturbance".
On Wednesday, Wang's mother received a notice, dated Monday, from police in the northern city of Tianjin, said Wang's lawyer, Li Yuhan. Tianjin police declined to comment when reached by telephone.
Wang is the best-known human rights lawyer targeted in an unprecedented nationwide sweep by Chinese police last July, during which hundreds of lawyers were detained. A formal arrest usually leads to a trial and conviction by China's party-controlled courts.

Another great culture brought low by its own imagined greatness. "Causing a disturbance," my ass!
Posted by genkaku at 9:06 AM