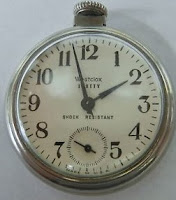 In the woods, you learned quickly enough: Hands were for doing and it made better sense to own a pocket watch. The small pocket on the Levi's jeans that everyone wore at work was not just decorative in 1959. That small nook at the top of the right-hand pocket and appended at its corners with copper rivets, was protective of a time piece whereas a wrist watch ran the constant risk, when the hands were busy doing, of receiving a life-ending slap from some piece of brush or sapling being cut or trimmed. I can't remember when I traded my wrist watch for a pocket watch, but I learned quickly enough.

And quickly enough I also learned to put the pocket watch away with the glass face pressed towards the body. The metal underside faced outwards in that pocket. The pocket was safer than a wrist watch but it too was open to rare assault -- that was the nature of the brush we cut in aid of running property lines for the lumbering company I worked for that summer. In any event, pocket watches made sense where wrist watches did not.

Watches at the time had no apps other than the two hands that marked socially-acceptable measuring sticks. You learned to wind them at the end or beginning of each day. A wind-up lasted a little more than 24 hours, so you did it every day... with the hands ... which were made for doing in the woods.

I had come to the summer job thinking that pocket watches were for men who wore vests and probably had plump bellies and there would be a gold chain that ran across their tummies to indicate their prosperity. Now, with my cheap-as-possible Westclox, I learned there was a useful function to pocket watches and the pockets to put them in -- something other than the ardor of display. The Westclox was "shock resistant" but who the hell knew what that meant when a maple sapling decided to slap back at my machete's slice? The time piece fared poorly under water: You'd go get another one, not in order to keep up with the Apple-prone, but rather because a watchmaker would probably charge more to fix it than a new one would cost. I guess that counts as conspicuous consumption, but it was less conspicuous somehow than today's get-a-new-one slovenliness.

Hands were for doing in the woods and through that summer, my callouses grew and grew. A crew of three or four people would rough out with their machetes and compasses the initial track that later would be followed by more delicate measurements made by men who knew the wiles of the transit and plumb bob.

When offered a choice of machetes, I had chosen a home-made one -- something someone had hand-crafted out of an old two-man-tree-felling steel saw. It was heavier than the other machetes (of the Indiana Jones variety) and required careful filing, but its heft paid off when it came to clearing rough trails. It meant that what needed to be done by the hands was done more easily. I could cut through a two-inch maple sapling without even breathing hard.

But it was a tool to handle carefully: I once had to help a careless fellow whose machete had laid open his leg below the knee cap and when I rolled up his pants to get a look, his face turned grey at the sight of a very clean cut that nonetheless oozed mightily. I thought he might pass out and waved the first-aid-kit's ammonia ampule under his nose. Everyone had a first aid kit to go with his helmet and spiked boots. It was part of the safety precautions. But there was no precaution for those who were afraid of blood. I wrapped up his wound with the pressure bandage and muttered consoling words of the kind I had heard in war movies -- "You're going to be OK" and "You're going to be fine." And he was fine, but he was also as grey as cigarette ash.

The hands did the bandage work and eventually went back to the work they had been sent into the woods to do. Hands were for doing and doing was what they did.

My Westclox told me it was shortly after 10 a.m. It was 1959 and there were no mobile phones or apps to improve the scene.

Hands were for doing. So I did something, I expect.

I'm not quite sure what brought all this to mind. Perhaps it was the fact that my Westclox seemed to be a way of enjoining me with others ... "I'll meet you at the movie house at 6:30." Now a watch is more pointedly self-referential ... heart rates and restaurants and maps. Or perhaps it's because hands seem less likely to do much of anything outside of finding the next self-improving state of mind or hedge fund. One thing's for sure: Today's wrist watches seem to be in little danger and Levi's have lots of competition, much of which is artfully ripped here and there. In 1959, people still patched the holes in their trousers.
Posted by genkaku at 9:53 AM