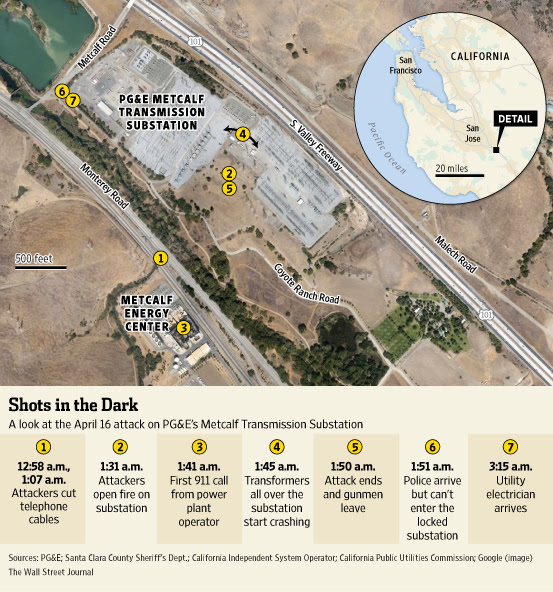 In the early morning of April 16, 2013, in less than half an hour, an unknown number of gunmen opened fire on an electrical substation in South San Jose, Calif., and knocked out 17 transformers that provide power to Silicon Valley. The assailants, who have yet to be caught, had carefully cut telephone lines near the site, thus opening further the window of time in which to shoot without interference from emergency responders.


"This wasn't an incident where Billy-Bob and Joe decided, after a few brewskis, to come in and shoot up a substation," Mark Johnson, retired vice president of transmission for PG&E, told the utility security conference. ... "This was an event that was well thought out, well planned and they targeted certain components." (Quote from WSJ story)

After the 52-minute event, which forced a realignment of electric delivery services, investigators found shell casings consistent with the ammunition used in an AK-47 and rock piles that may have indicated a pre-attack scouting effort in which the best shooting points were marked.


Before the attackers opened fire on the transformers, fiber optic lines running nearby were cut.
Whoever executed the maneuver knew where to shoot the transformers. They aimed at the oil-cooling systems, causing them to leak oil and eventually overheat. By the time that happened, the attackers were long gone.
Wellinghoff toured the site with Navy Seals, according to the Journal, and they were convinced that it was a professional job. Several people in the Journal story join Wellinghoff in talking up the physical (not cyber) threats to the grid's stability.

Wall Street Journal reporter Rebecca Smith (a link to her very good story requires a log-in, though I found it on Google without the hurdle) compiled the Feb. 4, 2014, article that attempts to nail down the time line and the wider implications of the attack. She got an assist from Tom McGinty.

Those interviewed for Smith's report have a number of points of view, none conclusive or totally satisfying. Was it an inside job? The knee-jerk "terrorism" rag doll is trotted out, as might be expected... but so-called terrorists usually have an agenda they might wish to publicize. More intriguing is the suggestion that the Metcalf Energy Center attack might have been a dry run for some wider action. No one suggests, explicitly or implicitly, that the government itself might have played a role since fear/"terrorism" has become such a useful staple since Sept. 11, 2001.

I first saw a reference to the story on public television news last night, nine months after the attack itself and a week since Smith's Wall Street Journal report. Certainly the story deserved the kind of close and careful look Smith gave it and yet I have a whispered question: Was the belated report a way to reinvigorate an interest that fell away too quickly after the attack itself?

I found it interesting that the attack had a sharpened intelligence written all over it. The perpetrators, whoever they were, were not angry, or if they were angry, they were smart enough to put their anger in the back pocket in the execution of a well-plotted plan.

I can imagine that latter-day leftie revolutionaries (with the inadvertent assistance from the National Rifle Association ... everyone deserves a gun, right?) could plan such an assault, Guy-Fawkes fashion. I can also suspect right-wing 'haves' perpetrating the action as a means of fueling the fear that can keep the have-nots in Department-of-Homeland-Security thrall: Was this, a la the killing of Osama bin Laden, the work of the presidential hit squad, the Joint Special Operations Command?

And, hovering in the midst of these perfectly useless speculations, the question whispers: Where would the United States be without electricity?
Posted by genkaku at 7:49 AM