The editor-in-chief of Libération, a left-leaning French newspaper co-founded in 1973 by existentialist philosopher Jean-Paul Sartre, has decided to quit. Nicholas Demorand's plan to transform the newspaper into a social network met with an explosion of outrage from the journalists who work for him. A one-day strike was attended by an edition that raked Demorand's plan over the coals: 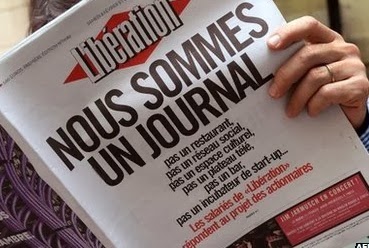 Under the restructuring plan, the paper would have been turned into a social network, providing content for multimedia platforms.
The paper's headquarters would have become a cultural centre, with a bar, a restaurant, a TV studio and a start-up hub.
Key shareholders defended the plan as the only viable future for the ailing 40-year-old paper, which saw its sales slide 15% last year.
But journalists accused the management of wanting to turn Libération into a brand and said the plan involved doing everything but journalism.

Both sides are right, in my opinion, but you know who's going to win in an Internet age whose thought processes are more and more often defined by Tweets and lattes.

Can excellence compete with entertainment? Short of the inevitable catastrophe, I doubt it.
Posted by genkaku at 10:08 AM