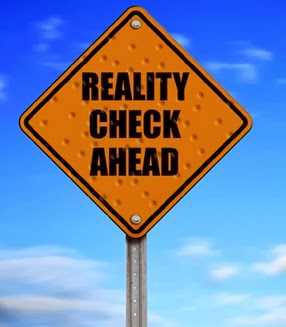 I had thought it was the Bible itself, but it seems to have been St. Augustine, one of the titans of Christianity, who observed in a more-delicate-but-nonetheless-pointed Latin that all of humanity is born "between shit and piss." (Inter faeces et uriname nascimur.)

This bon mot may be taken in a number of ways, I imagine, but one of them is as an encouragement not to get too big for our britches -- something along the lines of "we all put our trousers on one leg at a time." The observation can act as a reality check in what may be a heart-felt sea of credulous certainty or religio-philosophical swooning.

Heaven knows that anyone could occasionally do with a yanking of his or her soaring chain -- to be brought down from the nosebleed heights of some dearly-beloved understanding. Spiritual life or no spiritual life, I think this is true. But, since I am interested in spiritual adventure, I think it is particularly true in that realm.

The question that enters my mind is not so much whether such a reality check is necessary, but rather why.

In ordinary terms, I suppose we might wax smarmy about the advantages and good sense of exhibiting some humility in the course of daily life. Fat heads are a dime a dozen and a little perspective never hurt ... starting in the bathroom mirror, perhaps. But praising humility and attempting to live within its confines is a bit facile from where I sit. Sometimes I think there are as many humble-pie bad actors as there are self-involved blowhards. So why else might St. Augustine or any other decent spiritual adviser yank my chain?

My Zen teacher's teacher once asked a student (or perhaps gathering ... I wasn't there): "Which is more important -- sitting or shitting?" The slickly quick-witted will know immediately that this is a trick question. Intellectually, it's not hard to evade the thrust. Zen practice leans heavily on the fiery and sometimes ferocious business of seated meditation (zazen). The meditation is aimed -- or so it can seem -- at "attaining enlightenment" or something similar. "Attaining enlightenment" is sometimes portrayed as all-important in the realm of Buddhism and hence it is easy to see why anyone might give sitting a very, very, very important place: The odds of "attaining enlightenment" drop off significantly in the mind of someone devoted to zazen when zazen is taken out of the equation.

And into this framework of intense devotion and practice, suddenly someone delivers the very ordinary function of shitting: Get real! Get a life! Cut the crap! But why? Is it simply to teach a lesson in oh-so-serene humility ... a world of Steppin Fetchit devotion to some overarching wonder like "Buddhism" ... some institution or institutionalized thought realm like the Catholic church? Is the encouragement meant to lift up the institution or philosophy or religion while putting the arrogant devotee in his place? Well, there are certainly people who insure their own stature or the stature of their institution by playing this card... it has a way of producing donations, dontcha know.

But I think there is a more important role that down-home, chain-yanking observations play. Their object is not so much to instill fear or a toe-in-the-sand humility or to create cookie-cutter saints. Rather, their function is to encourage the devotee to know that spiritual life means whole life. It's not just the soaring possibilities of heaven or the dreary potential of hell -- the wonders of enlightenment and tut-tutting about delusion or ignorance: It's just your life and how many lives can anyone lead?

Everyone shits, everyone pisses. Everyone is born, everyone dies. Everyone is ignorant, everyone is enlightened. Zen students sit and Zen students shit. Some days are better than others ... but still, it's whole life, isn't it? Just how long is anyone willing to be batted back and forth between better and worse, perfumed and stinky, elevated and diminished?

Can anyone escape these facts? So ... is there a sensible reason for trying?

Sometimes -- that's sometimes ... no need to make a self-serving fetish out of it -- indirection is the most direct route.