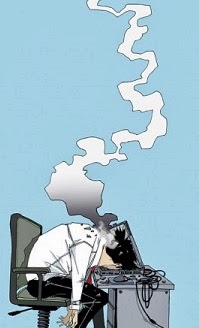 Yesterday, I went over to the local paper to get my picture taken. I dislike having my picture taken, not least because it memorializes for all posterity just how unphotogenic I seem to be ... and there it is, staring me in the face.

The paper needed a head shot to go with a monthly column I recently agreed to write. Having come to the agreement last Friday, and being as anal-retentive as I can be, I immediately went home and wrote something, which I then sent to a couple of friends for reaction.

They were kind enough to indulge my request, but the key word is "kind." I realized that I didn't really want "kind," I wanted a gut-level, brass-knuckles assessment: Was the piece internally consistent and logical? Was it sluggish and boooorrrrring? How did it feel? How did it taste?

Anyway, when I went over to the paper to get my picture taken, I stopped by the executive editor's desk (the guy with whom I had struck the deal) and asked him if he'd run a comb through what I had written thus far. He agreed and then -- will wonders never cease? -- passed along his comments later the same day. The critique was not unkind, but it felt like open-heart surgery without the anesthetic.

And as soon as I received it -- being as anal-retentive as I can be -- I went to work revising and reshaping. I stayed up past my bedtime. I felt the piece shape-shifting -- losing its seriousness, taking on the ballast of mediocrity ... but getting less abstruse and perhaps a little clearer into the bargain. I didn't feel that I HAD to make corrections according to the suggestions; it's just that I could see their point and usefulness and therefore made some changes.

The effort was focused and without any awareness of time.

I went to bed exhausted and simultaneously wired.

Which accounts, perhaps, for the almost-entirely-blank-slate that greeted me this morning when I looked around for something to write.
Posted by genkaku at 8:42 AM