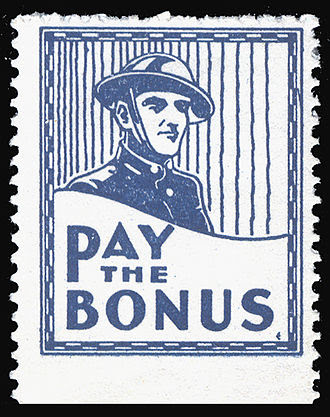 Strange to think that three of America's military titans -- Douglas MacArthur, Dwight Eisenhower and George Patton -- were all on hand in 1932 when the U.S. military forcibly disbanded a group of some 43,000 who had gathered in Washington to ask that promised veterans' bonuses be paid early. The "Bonus Army" petition/protest was made up of some of the same people who had no doubt elevated with their blood the stature of the men who came to disperse them.


The bonuses promised to the World War I veterans were not due to be paid until 1945, but many of the marchers had been hit hard by the Depression. They had no work and needed to feed their families, many of whom accompanied the petitioners to Washington. Part of the reason their demands were rejected was that if the full amount due were paid ($3.6 billion), it would slow the country's economic recovery, according to those in power.

When the marchers refused to disband, the police were sent in. When that didn't work, the military was brought to bear. Not all of the men who were or would become high-profile commanders agreed with the idea of attacking American citizens. Eisenhower, an aide to MacArthur, strongly objected, but later signed on.

The Bonus Army encampment was disciplined and well ordered. They had been soldiers after all. Former President Calvin Coolidge, who had vetoed (overridden) a bonus bill in 1924, may have expressed the dismissive attitude of some in 1932 when he commented that "patriotism ... bought and paid for is not patriotism."

Troops and tanks used in 1932 against fellow Americans....

Four protesters were killed and 1,017 injured. At least sixty-nine police officers were injured. In 1936, Congress overrode a presidential veto and paid the bonuses early.

The constitutional right to assemble and petition squares off against the governmental mandate to promote peace and tranquility. No one wants to live in an anarchic society and yet when the government defines its mandate so broadly as to deny its citizens (the ones who created the government) the wherewithal of life, is that any longer a constitutional government? The issue is tricky and sharply-drawn lines are for the feeble-minded. But when the government uses the uncertainty about where to draw the lines as a means of pitting Americans against Americans -- of arrogating to itself the power to define and impose -- isn't there something amiss? Is there something to be said for having a conscience?

I don't know, but things these days feel to me increasingly as if they were heading towards a reprise of what happened in 1932.
Posted by genkaku at 8:26 AM