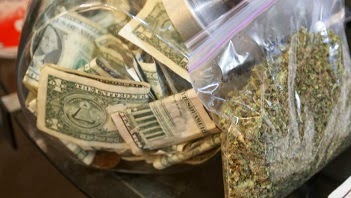 Legalization of drugs seems to be gaining an unlikely ally -- the otherwise moral straight arrows of big business. Between clean-living and money, I think we can guess where a bought-and-paid-for Washington will eventually come down. And you thought illegal drugs were just for the hippy-dippy constituency.

Case in point: Colorado's recently-approved marijuana laws have hit a snag. Many banks and credit-card companies will not process pot-sale credit-card transactions because they fear the fallout from federal laws that still make marijuana illegal. Without credit-card transactions, the tax bonanza (almost $20 million this fiscal year with skyrocketing potential thereafter) Colorado expected from marijuana sales threatens to go up in smoke as pot is forced into an all-cash business: If you can't track it, you can't tax it.

I just have a feeling that clean-living advocates are about to have a change of heart ... but of course, as usual, they will not take responsibility for it.