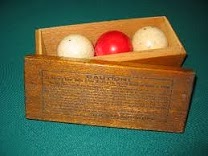 Out of the blue yesterday, there was an email from a friend I had gone to college with: He was reading my book, was enjoying it and was touched, he said.

I like surprises and Keith's email was a surprise: We're not generally in touch. But, on first reading his words, there was a voice that said, "Hunh? What book?" and then settled back into "Oh, OK. Now I remember." And I was flattered he was reading it ... and pleased that someone got enjoyment from something I had done.

I don't remember the book much. What I remember when I think of Keith is the snow-day in college when the two of us arrived at the college billiards room at 8 a.m. and did not leave until midnight when it closed up shop. We played three-cushion billiards ... for sixteen hours.

Three balls, no pockets, green-felt table top. There was some serious protocol involved ... where anyone stood, when talking was OK, how to approve your opponent's shot without saying a word.

Later I would win a first-place trophy in an all-college match. On that occasion, I happened to beat Keith.

But winning was never so much the point for us.

How nice it is, at any age, to find someone to be crazy with.
Posted by genkaku at 10:39 AM