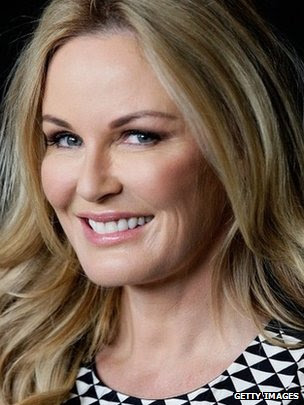 In Australia, TV personality Charlotte Dawson, 47, was found dead at her Wooloomooloo home in Sydney today. Police said there was nothing suspicious in the death and the BBC report was replete with references to Dawson's "history of depression."

I had never heard of this person before, never seen her in action, and so was left with an impression that began and ended with her pretty/handsome/beautiful picture. A looker.

If looks assured a peaceful life, Charlotte Dawson would have had the world by the tail. What would anyone so comely have to worry about?

1. How hard anyone can work to confect a glowing persona to present to the rest of the world -- something that will assure stature and admiration and worth-while-ness or a picture of got-it-all-together-ness. Not only is this portrait for the benefit of others ... it also can seep and creep until I may believe it myself ... yeah, things are kool!

2. That all the time and effort put into painting this picture (which may be quite accurate in a one sense) also has a certain panicked quality about it: I may allege that I am standing on firm ground, but then the moments rise up when I know I am dancing on Jell-O. And when such moments arise, there is a mad scramble to reassert firm ground -- another car, another partner, another pair of shoes, another job, a bigger house, another academic degree, another prescription, another ... whatever it is that will maintain whatever it is I am trying to maintain.

And it strikes me as sad that the seemingly built-in mechanism that allows for the creation of persona is not matched by an equally accomplished capacity to cope with the sense of dancing on Jell-O. But there is no such readily-available mechanism for the sense of  imbalance, uncertainty, falling, loneliness ... dancing on Jell-O. Sometimes pretending will work, and sometimes, a la Charlotte Dawson, perhaps, the Jell-O claims the scene.

Creating a passable persona ... dancing on Jell-O: I guess everyone has to figure this out in quiet and sometimes frightful times. I have a hunch that these two are not two at all, but rather, like a loving couple, so nearly and dearly intertwined that separating them is an intellectual folly. Like Louis XIV, each arrives at a settlement that sounds very much like, "l'état, c'est moi:" Dancing on Jell-O is a passable persona -- one that has the advantage of being true ... and not so extraordinary or dreary after all.

Which doesn't mean it's always easy.
Posted by genkaku at 10:00 AM