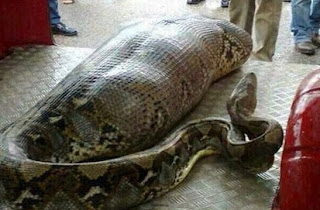 Sitting here, for some reason, trying to connect a couple of dots I want to connect but can't yet manage. More coffee may help....
1.


JAKARTA, Indonesia (AP) — A 7-meter-long (23-foot-long) python has swallowed a woman in central Indonesia, a village official said Saturday.
The victim, 54-year-old Wa Tiba, went missing while checking her vegetable garden near her village on Muna island in Southeast Sulawesi province on Thursday evening, according to the village chief, Faris.
On Friday, her family went to look for her at the garden but found only her belongings,


LOS ANGELES (AP) — A state appeals court has reinstated — at least for now — California’s law allowing terminally ill people to end their lives.
The Fourth District Court of Appeals in Riverside issued an immediate stay Friday putting the End of Life Option back into effect. The court also gave opponents of its decision until July 2 to file objections.
The law allows adults to obtain a prescription for life-ending drugs if a doctor has determined that they have six months or less to live.