Trump critic gets the boot 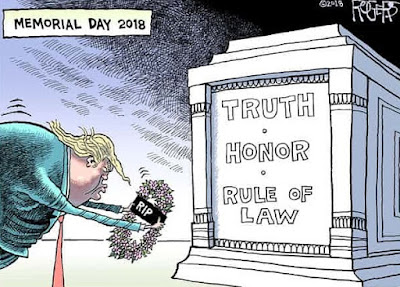 A cartoonist who lost his job at the Pittsburgh Post-Gazette believes his searing portrayals of Donald Trump were the most likely cause of his firing.
Rob Rogers was terminated on Thursday by the paper for which he had worked for 25 years, after six cartoons in a row were spiked and his employer tried to change his terms of working, he said.

Skimming back through an ill-remembered history, it may be unpleasant to recall that newspapers did not get their impetus from a down-trodden mass so much as they got their impetus from those who saw a buck to be made and a larger megaphone with which to make it. The vaunted realms of The Fourth Estate came later ... if I remember correctly, which I may not.

Agitation and propaganda is what we like to accuse others of -- dictatorships and the like -- but moving backwards is Donald Trump's spécialité de la maison (this, perhaps?). Fake news is all news that does not burnish his star. Agitprop, here we come.

I don't know the particulars of this story with the cartoonist, but it is clear that agitation and propaganda is regaining some old traction.