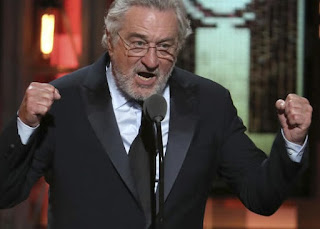 There is something disheartening and yet apt when the most direct critic of the president of the United States turns out to be a movie actor.

Remember when politicians and other public figures could occasionally be credited with courage? Remember when Trump vowed to bring back and then claimed to have brought back 45,000 coal mining jobs ... when the number of new coal jobs totaled 1,200? Remember when he promised to "repeal and replace" the health care system referred to as "Obamacare?" The replacement is no where in sight. And remember the peacemaker Trump who  “will never send our finest into battle unless necessary, and I mean absolutely necessary, and will only do so if we have a plan for victory with a capital V,” he thundered. “The world must know that we do not go abroad in search of enemies.” And, by the way, global warming supported by science instead of whimsy?

What is left but spit-whistling expletives for a man who never met a policy failure he couldn't blame on someone else.

Pathetic and saddening and, yes, Mr. DeNiro, I think you are on about the only path left ... and we are all reduced to the Trump standard of volume-replaces-veracity.
Posted by genkaku at 7:21 AM