brilliant and wimpy, both? 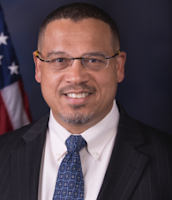 There is something egregiously wimpy and simultaneously brilliant about U.S. Rep. Keith Ellison's (D-Minn.... who plans to resign) opinion piece in the Guardian today. The piece posits the idea that Europe can deliver a kick in the ass the U.S. President Donald Trump by sanctioning the real estate he owns in Europe. Trump may weather other tut-tutting that affects middle-class Americans, but when the money comes from his own pocket, it might help to calm him down ... so Ellison argues in the somewhat sloppily-written piece.

Great idea -- hit him in the wallet.

But does Ellison need to look overseas for a good idea that American politicians refrain from delivering in one form or another? Pretty wimpy. Pretty Republican. Pretty Trump-style ... finding someone else to carry the water or responsibility when you (errrrr) can't or won't.