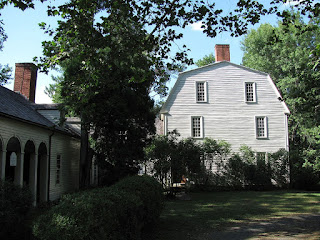 Porter–Phelps–Huntington House in Hadley, Mass., a nearby community, was where my wife and I ended up on a Sunday drive yesterday. The place, now a museum, housed eight generations and is large-large-large. Floorboards in the carriage house show indelible horseshoe marks. Some of the walls are cobbled together with boards that are literally two-feet wide. Nails are, if not forged "back then," are reasonable replicas forged in the present. The place reeks of a tradition that someone took quite seriously.

Moving around slowly, I enjoyed the surroundings, so large-large-large. Who knows what interest will strike what person and cause him or her to dub it "serious" in the heart. What a home!

Which made me realize that one of the holes in my education relates to the matter of "home." I just never had much training in it. My father and mother were divorced before I was sentient. My mother was a writer. My father a college professor. I can remember getting off the train that ferried me to Northampton, where my father taught at Smith, and being pretty hyped about a weeklong visit or whatever it was. The parent who is absent, of course, is the idealized one and I was idealizing within ... longing to see my father, the absent one. And I will never forget it ... I saw my father, my heart leapt and he approached, perhaps with a smile, and extended his hand to be shaken. It was the habit of the time, but my heart was, not for the first time, dashed: Idealizing longs for a hug. I got a handshake. I was five or six, I imagine.

How much of that handshake did I pass, perforce, to my children, my wife, my family? How much attributing did I take from my powerful mother and ascribe unfairly to other women? I look back and wonder and realize that much of my childhood was lived out in what felt like abandonment. My father shook my hand. My mother had her own demons and I could not have made her single-parent status any easier. Perhaps I was the pet dog that knew no better than to hump a guest's leg, to cling and hope and hear or feel the unspoken words, "Shoo! Shoo!"

Abandoned and hence, somehow, naive. If I could just be good enough, then someone might like me, most important, my parents, but then, everyone else as well. I figured everyone was smarter and stronger and happier and I had to hurry to catch up and, perhaps, feel less abandoned. My mother's mother died when my mother was 2, in the Influenza Epidemic of 1918, and my mother ached for even the slightest memories ... much as I did, I guess. When you're a kid, it's your fault ....

I had little or no sense of self -- from how I looked to how smart I was to how good I might actually be at sports. Others were imbued with a sense of entitlement that I too wanted.

Naive and abandoned and it's water over the dam -- weaknesses that had countervailing strengths, but what did I know of strengths? I kissed my kids and wished like fury it could have been more. It's not so sad now -- more like a middling rock in the little red wagon that I pull behind me much as others pull their red wagons behind them.

Strange to think what point of interest will catch the eye of the one passing through. Family ... I never did get the hang of that. I do hope I didn't screw the pooch too badly.

So much for the history of a large-large-large house.
Posted by genkaku at 1:49 PM