Trump vs. the kids 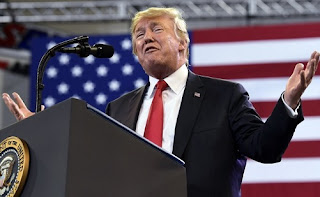 WASHINGTON (AP) — As a crisis of migrant children separated from their families provoked national outrage, President Donald Trump said he was powerless to act through an executive order. Five days later, he did just that.
The president’s abrupt about-face laid bare the administration’s capricious use of executive power as it presses forward with a crackdown on illegal immigration, first ensnaring children in its “zero tolerance” prosecution policy, then coming up with a “stopgap” reprieve in the face of global condemnation.
The president who had declared as a candidate that “I alone can fix” the nation’s problems in recent weeks threw up his arms and said only Congress could solve the problem of children being separated from their parents — and then reversed course once again.
What changed?
Brookings Institution senior fellow Bill Galston, a presidential scholar and a Clinton White House official, described it as “classic blame shifting” in the face of mounting bipartisan criticism and amid heartbreaking tales of toddlers kept from their parents. The president, he said, was in an “unsustainable position and would like to be bailed out of it without having to admit fault.”


DULUTH, Minn. (AP) — Hours after reversing himself to end the forced separations of migrant families, President Donald Trump returned to the warm embrace of his supporters at a raucous rally to defend his hard-line immigration policies while unleashing a torrent of grievances about the media and those investigating him.


WASHINGTON (AP) — President Donald Trump is misrepresenting the scope of his executive order that would halt his administration’s policy of separating children from their parents when they are detained illegally crossing the U.S. border.
He suggests the order is a permanent solution. But the president is contradicted by his own Justice Department....

Does anyone remember the ascendancy of former president George W. Bush, the man who oversaw the neat-as-a-pin collapse of the World Trade Towers in New York on Sept. 11, 2001? How do you choose between a puppet and a sociopathic moral cipher? Just about the time anyone thought it couldn't get worse, it did. Just about the time anyone thought gun control might be important because of the kids killed in various schools ... suddenly, the Second Amendment took on a new luster.

And then there's Rachel Maddow, a pretty-tough news hound, breaking down: