I suppose that one of the positive bits of fallout from the up-trending tribalism of idiocy is a reduction in student debt: When everyone already has a hardened opinion and is bent on shoving it down everyone else's throat, who the hell needs a college education? 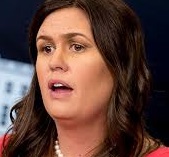 In the 1960's, the somewhat blurry war cry was, "let's get naked!" More recently, the rousing chant has morphed into a blurrier-still, "let's get stupid!'

“I always do my best to treat people, including those I disagree with, respectfully and will continue to do so,” the press secretary wrote. “Her [the owner's] actions say far more about her than about me.”

Restaurant owner Stephanie Wilkinson said she had no regrets about her decision to bounce Sanders:

“I would have done the same thing again,” she said  “We just felt there are moments in time when people need to live their convictions. This appeared to be one.”

Institutions of higher learning, governments, and who knows how many other organizations have taken to dis-inviting or dissing those unwilling to flog the inviter's point of view, etc., etc., etc.

Sanders, of course, is the front-woman for U.S. President Donald Trump, a deplorable man with deplorable conviction$$$$ if ever there were one. But the echoes of Friday's dust-up have ramifications that those espousing "democracy" need to address. Sorry, I don't serve black people or gay people or people so moral that their under-ware squeaks. Sorry, your fingernail polish is the wrong color. If there is no room on my platform for you, there is no room on your platform for me. I may hate the hell out of it but ... tough titty.

A college education might teach a man or woman to listen and collate the arguments of an opponent. Isn't this one of the tools with which to upend an opponent's argument? How better to defeat him or her? But now, since my tribe abhors this or that, investigation is no longer necessary. No need to notice that Palestinians seem to be forever armed with knives and slingshots where Israeli soldiers fire live bullets into their midst. No need to compare the arrest rate and the conviction rate of those swept up in so-called terrorism's net. No need to query if putting out a flag is somehow illegal or if it's just offensive.

Sorry, I don't walk on the same sidewalk with those who disagree with me.

No need to think.

No need to run up college indebtedness.

Does Donald Trump contribute day after day to the accretion of stupidity? Sure. Is that an excuse for being stupid as well? The Nazi Adolf Hitler had Joseph Goebbels as his press secretary. Donald Trump has Mrs. Sanders. I'm stupid enough without adding to the load.


Even press secretaries get hungry.

PS ... associatively, perhaps, the unwillingness of banks to involve themselves in gun deals.
Posted by genkaku at 9:43 AM