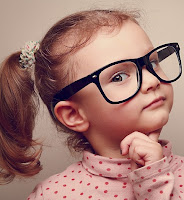 In the joke-dotted past, there is the one about the first-grade teacher, Miss Jones, who was drilling her students in vocabulary. "Frugal," she explained, meant thrifty; a frugal person was one who saved. She then addressed the class and asked little Johnny if he would try to use the word "frugal" in a sentence.

"Once upon a time," Johnny began, "there lived a beautiful princess. Her father, the wicked king, locked her up in a high tower. One day, as the princess stood by the only window in her tower, a handsome prince came riding by and the princess called out, "Frugal me! Frugal me!" So the prince frugal-ed her and they lived happily ever after."

It was this silly that came to mind when reading the story about research that seemed to show that people who wore glasses might, in point of non-mythological fact, be as much as 30% smarter than those who didn't.


If you wear glasses I’ve got some good news: you may well be smarter than the average person. A new study published in the journal Nature Communications has found that needing to wear glasses is associated with higher levels of intelligence. But you probably knew that already....
It’s not just a pop culture trope – a University of Edinburgh study has found intelligent people are 30% more likely to have genes related to poor eyesight.

The story -- which does have other aspects -- left me wondering, 1. Since I own and use three pairs of glasses, am I 90% more likely to be smart or is my feebleness in math showing its hold over me once more? 2. Who makes this shit up and more, who pays for it?

I have every confidence that someone will step in here and frugal me.
Posted by genkaku at 10:59 AM