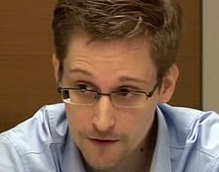 It has been five years since National Security Agency contractor Edward Snowden began releasing stolen classified documents to the press.


On June 5, 2013, The Guardian in Britain published the first story based on Snowden’s disclosures. It revealed that a secret court order was allowing the U.S. government to get Verizon to share the phone records of millions of Americans. Later stories, including those in The Washington Post, disclosed other snooping and how U.S. and British spy agencies had accessed information from cables carrying the world’s telephone and internet traffic.

Snowden, 34, remains holed up in Russia. Detractors continue to label him a "traitor." Supporters see him as more of a "whistleblower." And yet the further the issue gets from its 2013 starting point, the more flimsy the government accusations appear: To date, not a single skein of concrete evidence shows that Snowden was careless with the releases or that anyone was hurt in any serious sense. The word "traitor" rests on the belief that what the government says must be true because it is the government. When the government says something should be secret, the rest of the nation should agree ... just because.


“It’s been almost five years since newspapers around the world began reporting on the Snowden archive and the NSA has offered all kinds of shrill and reckless rhetoric about the ‘damage’ it has caused, but never any evidence of a single case of a life being endangered let alone harmed,” [former Guardian reporter Glenn] Greenwald said.

There are plenty of plaints on the other side of the ledger, but as the years stretch on, the unwillingness to cite even one fleshed-out concrete instance of damage takes the air out of the patriotic balloon. "We can't tell you because it is secret" is a tale that just doesn't wash as time passes by.

And to think that in the five years since Snowden launched his cannon ball, another arguably traitorous figure has lurched into the limelight.
Posted by genkaku at 5:59 PM