chalk one up for the heterosexuals 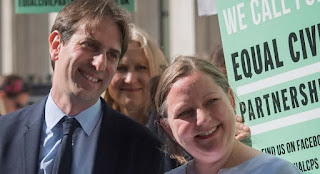 A heterosexual couple who were denied the right to enter into a civil partnership have won their claim at the UK’s highest court that they have suffered discrimination.
Justices at the supreme court unanimously found in favour of Rebecca Steinfeld and Charles Keidan in a decision that will put pressure on the government to change the law.
The pair, from west London, who believe that the institution of marriage is patriarchal and sexist, have fought a prolonged legal campaign to open up civil partnerships to opposite-sex couples.

Can you imagine the conniptions in the Muslim/Christian/Jewish/Buddhist/Hindu environs?

Sometimes I purely love the Brits.