At the same time that the nation is being roused up/enraged by the separation of children from their parents as they enter the U.S. illegally across the Mexican border, President Donald Trump announced his desire/will to create a sixth military branch -- the Space Force:


"We must have American dominance in space," Trump said during a speech at the National Space Council meeting, held at the White House on Monday. "I'm hereby directing the Department of Defense to immediately begin the process to establish a space force as the sixth branch of the armed forces."

And the minor footnote of climate change: 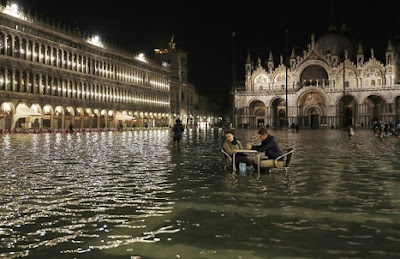 WASHINGTON (AP) — You don’t just feel the heat of global warming, you can see it in action all around.
Some examples of where climate change’s effects have been measured....


I feel I ought to be tugging on my mother's skirt and asking, "Mommy! Mommy! Why are things so routinely fucked up?"

Maybe if Trump throws enough chaff in the air, no one will notice the tax cut he managed for the wealthy, the only piece of legislation politicians might care about. No health care, no coal jobs, no wall on the Mexican border, no other promises kept ... but a lot of chaff. (He did meet with Kim Jongun, North Korea's leader ... and that's better than the blow of a stick, as my father used to say.)

But still, but still ... why are things so routinely fucked up?
Posted by genkaku at 7:35 AM