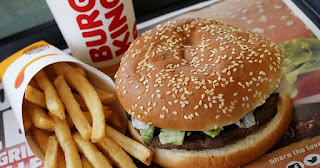 And, in the good taste department,


On Tuesday [Burger King] announced a promotion on VK, the Russian equivalent of Facebook, offering women 3 million Russian roubles ($47,000) and a lifetime supply of Whoppers if they get impregnated by football players competing in the World Cup.
Shortly after announcing the campaign they pulled it due to backlash.

I can't tell if this story is true or not. At the moment, it seems to be true ... a trope for Donald Trump, president of the United States and a man who never opens his mouth without lying through his teeth. As of May 1, 2018, the Fake-Newser-in-Chief had crossed the 3,000 lies and misstatement line according to the Washington Post.

The Russians, the burgers, the president, the Whoppers... it might be funny if people weren't dying while the fools gained ground.
Posted by genkaku at 7:33 PM