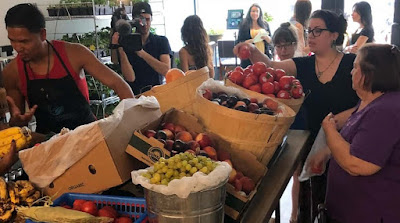 The new store aims to tackle food insecurity and wastage by pitting the two issues against each other, said Jagger Gordon, the Toronto chef who launched the venture earlier this month.
Every provision is donated by a network of partners across the region, and many of them – from blemished or misshapen produce to staples that are nearing their expiry date – would have otherwise ended up in landfills....
The store, which also includes a pay-what-you-can bakery and cafe, is the latest initiative to emerge from his non-profit firm, Feed It Forward. The roots of the organisation trace back to 2014, borne out of Gordon’s frustration at the C$31bn (£17.6bn) worth of food that ends up in Canadian landfills and compost sites each year while one in eight Toronto households struggles to put food on the table.

It's a bit like Marie Antoinette's apocryphal "let them eat cake," but where bellies are empty, let the oligarchs smirk as the peasants sweep up the leavings. It has always galled me to see wire service photos of oranges or tomatoes or various fruits or vegetables heaped up as somehow imperfect. I don't know about anyone else, but I look for the tomatoes that are NOT uniformly red (and hence gassed to make them look red) in the supermarket. Did anyone who buys that stuff ever walk through a tomato patch?

Oh well, it's just the damned socialists at work, I guess.
Posted by genkaku at 12:51 PM