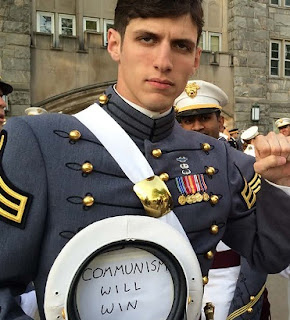 A West Point cadet who wore a Che Guevara T-shirt to his graduation and posted a message online saying “communism will win” has been discharged from the US army.
The images Spenser Rapone posted on Twitter from his May 2016 West Point graduation were meant to shock: in one, he opens his dress uniform to expose a T-shirt with a red image of the socialist icon Che Guevara. In another, he raises his fist and flips over his cap to reveal the hand-scrawled message: “Communism will win.”....
Rapone said his journey to communism grew out of his experiences as an army ranger in Afghanistan before he was accepted into the US Military Academy.


Being an Army Ranger is no cake walk.