With the slaughter in Syria or the disproportionate response Israelis can visit on Palestinians, it's a little hard to label this man "crazy," though it is enough to make your belly hurt: 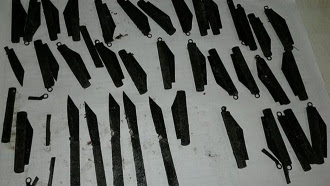 Doctors in the northern Indian city of Amritsar say they have surgically removed 40 knives from a man's stomach.
The man, 42, had swallowed the knives over a period of three months.
Dr Jatinder Malholtra told the BBC that the man met him last week after suffering severe pain in his stomach.
He said the man did not tell doctors that he had been swallowing knives.