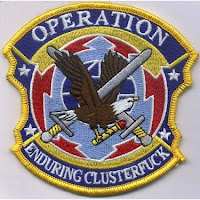 The finances of the U.S. Army are so fucked up and apparently fraudulent that it seems to be a wonder anyone can speak about them with a straight face. The numbers are so enormous that even Reuters has the devil's own time not saying "who the hell is running this outfit?" The U.S. may laugh up its sleeve at banana republic accounting and corruption, but its own lies and finagling with the single biggest item in the U.S. budget defies words. It is so big, you just know little or nothing will be done about it. We're talking trillions of dollars.


The United States Army’s finances are so jumbled it had to make trillions of dollars of improper accounting adjustments to create an illusion that its books are balanced.
The Defense Department’s Inspector General, in a June report, said the Army made $2.8 trillion in wrongful adjustments to accounting entries in one quarter alone in 2015, and $6.5 trillion for the year. Yet the Army lacked receipts and invoices to support those numbers or simply made them up.
As a result, the Army’s financial statements for 2015 were “materially misstated,” the report concluded. The “forced” adjustments rendered the statements useless because “DoD and Army managers could not rely on the data in their accounting systems when making management and resource decisions.”