just one photo out of Syria 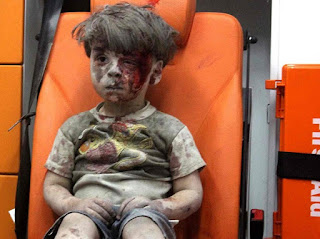 [BBC] Syrian activists have released striking pictures of a young boy rescued from a destroyed building after an air strike in the divided second city of Aleppo.

Brought to you by men and women convinced that their views and clothes a powers warrant the price. Their voices are modulated and thoughtful ... and the kid is five-fucking-years old!
Posted by genkaku at 10:20 AM