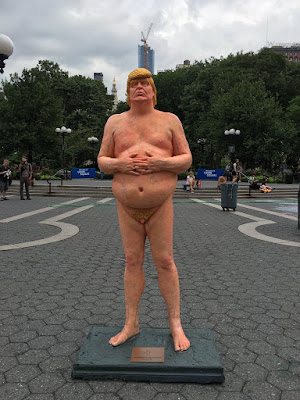 A full-frontal-nudity statue of Republican presidential nominee Donald Trump went briefly on display in Manhattan's Union Square Park in New York today, according to a nudge passed along in email.


The full-frontal sculpture of the Republican presidential candidate, which was glued to the cobblestones with epoxy, stood for two hours before being removed by the Parks Department around 1:20 p.m.

I don't see anyone saying, "It might have been Hillary."

PS: The creation of "The Emperor Has No Balls" statue.
Posted by genkaku at 6:01 PM