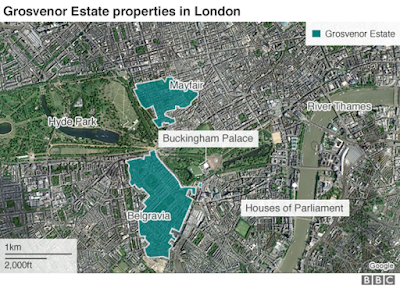 Billionaire landowner and philanthropist the Duke of Westminster has died aged 64, his family said.
Gerald Cavendish Grosvenor died at the Royal Preston Hospital in Lancashire on Tuesday after suddenly becoming ill on his Abbeystead Estate.
The duke's fortune was estimated at $10.8bn (£8.3bn) by Forbes magazine, making him the world's 68th richest person and the UK's third.

I don't know about anyone else, but "wealth" is something I generally assess according to the behavior of the one assessed as "wealthy." Seldom do I parse the particulars of the physical holdings that constitute "wealth." But as the BBC map above indicates ... some wealth can take your breath away.

Judging by the perilously polite news story, Grosvenor was not entirely at ease with the manna he managed.
Posted by genkaku at 6:47 PM