the book no one can read 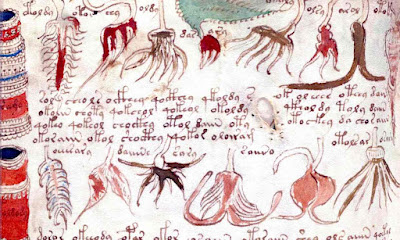 If you knew, what would you actually know?

If you didn't know, what would you actually NOT know?


[The Guardian] It’s one of the world’s most mysterious books, a centuries-old manuscript written in an unknown or coded language that no one has cracked.
Scholars have spent their lives puzzling over the Voynich manuscript, whose intriguing mix of elegant writing and drawings of strange plants and naked women has some believing it holds magical powers.
The weathered book is locked away in a vault at Yale university’s Beinecke library, emerging only occasionally.

In the 15th century volume:


The plants drawn have never been identified, the astronomical charts don’t reveal much. The women also offer few clues.
Scores have tried to decode the Voynich, including top cryptologists such as William Friedman who helped break Japan’s “Purple” cipher during the second world war.

Given Yale's influx of mail on the topic (not to mention the credentials of those interested ... the "Purple" code was very serious stuff during WWII), obviously people are dying to know. Is it true? Is it false? Is it an elaborate ruse? Is it the keys to the kingdom?

What would you know if you knew

PS. One interpretation puts the book in the 16th century and -- far from Europe -- in Mexico.
Posted by genkaku at 10:46 AM