terrorism ... on the one hand and the other 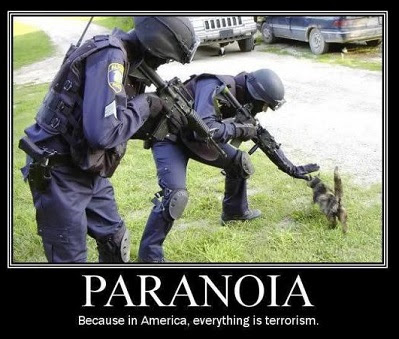 There seems to be a degree of confusion about those who claim to take "terrorism" seriously: On the one hand terrorist wannabes are ignorant to the point of idiocy; on the other, those who seek to inform themselves are equally suspect. Talk about a 'weird shit-o-meter.'

PARIS (AP) -- The jihadi employment form asked the recruits, on a scale of 1 to 3, to rate their knowledge of Islam. And the Islamic State applicants, herded into a hangar somewhere at the Syria-Turkey border, turned out to be overwhelmingly ignorant.
The extremist group could hardly have hoped for better.
At the height of Islamic State's drive for foot soldiers in 2013 and 2014, typical recruits included the group of Frenchmen who went bar-hopping with their recruiter back home, the recent European convert who now hesitantly describes himself as gay, and two Britons who ordered "The Koran for Dummies" and "Islam for Dummies" from Amazon to prepare for jihad abroad. Their intake process complete, they were grouped in safe houses as a stream of Islamic State imams came in to indoctrinate them, according to court testimony and interviews by The Associated Press.

Of course a good education or a bad education cannot deter those who might be willing to pull the trigger of an AK-47: The bullets are just as lethal either way. But for those hoping to or claiming to be able to parse the foe that dubs itself "Islamic State," gathering up characteristics suggests itself as a pastime of choice. That's part of how the terror mavens claim to keep the rest of us "safe" dontcha know. "They don't know what they're getting into," for example.

But then, on the other hand, there's the story of the newly-wed who was singled out on an airline adventure, apparently because she was reading a book.


[The Guardian]A few weeks ago, as I prepared for my honeymoon in Turkey, the usual concerns of a Muslim traveller went through my mind. Will I be the one singled out? Will I get checked more than someone else just for being who I am?

Although I wasn’t aware of this at the time, a cabin crew member on my outbound flight reported to the authorities that I was reading a book called Syria Speaks: Art and Culture from the Frontline, a collection of literature, poems, photos, songs and cartoons from Syrian artists and writers. The first clue I had that something was wrong was when I landed in Turkey and was stopped while leaving the plane. I was told this was a “random check” but I was the only passenger to be stopped. Our trip was off to a horrible start. Further tensions occurred as our stay was disrupted due to the military coup and as a result, we had to cancel our flight to Istanbul and were stranded in Marmaris, our resort. We salvaged the remainder of our honeymoon as best we could.
On our return to the UK, two police officers were waiting for me....

OK, you've got a big mouth, a bulging pecker and you don't know squat.
OK you seek a deeper understanding so you can know squat.

Either way you're a terror suspect? Isn't that too vague by half? Is it an approach worth funding? To me it feels suspeiciously like, "Everyone's a terrorist. Trust me. I know. I won't tell you how I know, but trust me, I know."

On the [comparative] bright side, The Wall Street Journal, a newspaper aimed at those for whom money is a touchstone, called in an editorial for Republican presidential nominee Donald Trump to either get his political act together before Labor Day (Sept. 3) or get the hell out of the race for the White House.

Not that their actions don't deserve the observation, but Republicans this year have painted themselves into a negative, white-guy, unpatriotic corner that is clearly labeled "clusterfuck" ... or anyway that's how it looks to me.
Posted by genkaku at 11:21 AM