-- House-hunters with cash on hand may find something quaint in urban Omaha, Neb., where homes ranging upwards of $400,000 a pop are gracious living to a T. Spacious, upscale, and probably ahead of a lot of other Joneses.

And then there's the dirt road on which all this upscale real estate is located....


The sudden appearance of miles of dirt road in the midst of urban Omaha has prompted angry protests by residents and showcased a conflict over the public services homeowners should expect when a modern city outgrows some of its old real estate agreements.

-- And for more in the not-to-fret department there are the piranhas with human-like teeth that have showed up in Lake Michigan. Don't worry, they're said to be vegetarian although if they can grow to 30 inches, you might imagine they could take a pretty good bite out of your carrot. 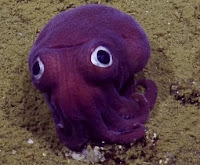 -- The purple googly-eyed squid is put forward as being true. I can't help but wonder if they will be let loose on an Omaha street during a deluge ... only to be eaten by a piranha that broke its vegan vow.
Posted by genkaku at 6:13 PM