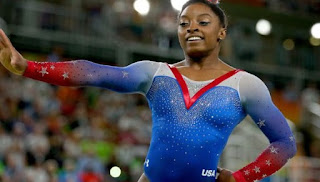 [BBC] She has flipped, tumbled and leapt her way into the hearts of millions over the course of the Olympic games. But when Simone Biles returns home she will be in for not just a major celebration but also a hefty tax bill.
The 19-year-old has won five Olympic medals - four gold and one bronze. She has cemented her title as the world's best gymnast by taking home the gold in the all-around after three successive world championship titles - a feat only accomplished by three others in history.
But all that winning will cost her. On 21 August, Ms Biles could be slapped with a tax bill close to $43,560 (£33,479)

Leave it to the Americans to put a price tag on things. I wonder if the athletes get to deduct all the time and money spent honing their skills.