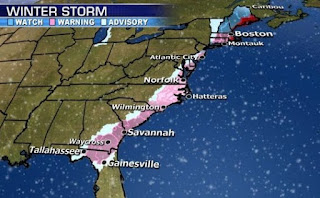 What a relief -- a "weather bomb" advancing on the East Coast of the United States and some relief from the flimsy braggadocio of a U.S. president whose lies and moral ambiguities tend otherwise to dominate the news cycles. A big snow storm is real and white and accumulating and shows signs of being actual and factual.
A "bomb cyclone" is


... [A] version of a real weather term that applies to a massive winter storm that pulled together Wednesday off the U.S. Southeast coast. But as fearsome as the storm is with high winds and some snow, it may not be quite as explosive as the term sounds.
Meteorologists have used the term “bomb” for storms for decades, based on a strict definition, said University of Oklahoma meteorology professor Jason Furtado....
“We use the term bomb,” Furtado said. “We know what it means, but I do think it gets a little hyped up.”

Here, 90 miles west of the Massachusetts coast, schools have shuttered and closed, businesses have followed suit and the snow is a mere tickling and trickling. Governors, including our own, have urged constituents to stay home and stay warm. The coastal areas of Massachusetts are in for a predicted clobbering... 14 inches, perhaps. And it's a relief ... it may only be a twinkle in some future daddy's eye at the moment, but at least it has a practical ring to it.

It sort of reminds me of the word "alienation," which once had some scientific parameters and then was co-opted by the dystopian-prone masses.

Yo -- duck and cover before the "bomb" lands!

But at least it isn't the moral cowardice of a man who never met a fact he couldn't or wouldn't corrupt.
Posted by genkaku at 8:43 AM