paying for the 'economic summit' 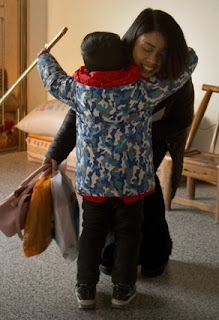 As U.S. President Donald Trump descended today on the "Economic Summit" (read "trade show"), among the world's oligarchs and gazillionaires in Davos, Switzerland, well, there is time to reflect, perhaps: Someone's got to pay the price for all this price-y salesmanship. Trump sells off bits of America, not least whatever good name it once had. What the hell, everything's got a price tag, right? He's a merchant with a megaphone. Someone's got to pay and it's all OK as long as that someone is not "me."

Meet Deng Guilian, a 36-year-old woman with two kids. She "hadn’t planned on going back to work. That changed after her husband was arrested while investigating labor abuses at Chinese suppliers for Ivanka Trump’s brand."


Trump’s brand and spokesman declined to comment for this story, but in her 2017 best-seller, “Women Who Work,” Trump spoke about her commitment to improving “the lives of countless women and girls” and acknowledged that her father’s presidential campaign gave her “an unprecedented opportunity to advocate for change.”

Lord, the capitalist circle-jerk is tiring.