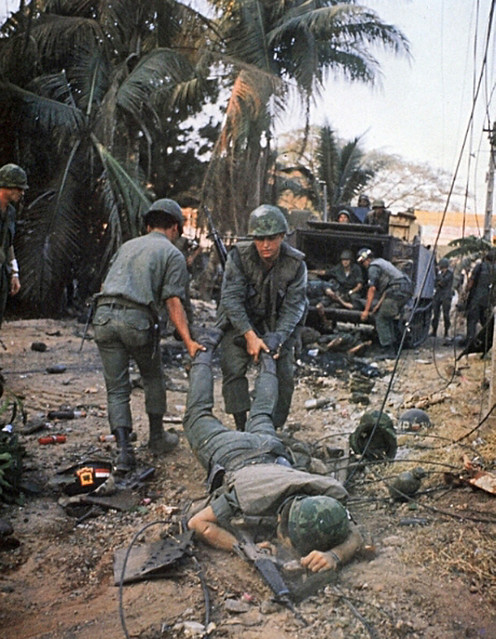 Arguably, one of the contributing factors to the American loss of the Vietnam War (police action) was the parade of body bags containing American soldiers that made the nightly news in the U.S.A. Inside those black bags were Americans that Americans got a chance to (sort of) see them from their sofa-foxholes. (Strange that I cannot find the photos on Google images that are seared in my brain... bags lined up on the tarmac outside the open maw of an American transport plane. Maybe they don't exist and it's all my over-active imagination. NOT!)

By the time the U.S. war in Afghanistan came along, the purveyors of war had learned and flag-draped coffins were not allowed to be photographed out of 'respect' to the bereaved and, coincidentally, to sanitize the positions of the purveyors. Now they could speak of "heroism" and get away with it. No searing, burning, aching, screaming sense of loss to no purpose. No more chance of anyone saying, "Guess what! If you send young men to a place where killing is the norm, they will -- one guess! -- get killed." Sons, daughters, husbands, friends ... killed. No need to display the facts. No endgame enunciated, no endgame in sight ... killing is the name of the arena and those who built the arena do not want to be questioned or demeaned.

And now, today, the information noose has been tightened:


WASHINGTON (AP) — The Pentagon has ordered an independent federal auditor to stop providing the public with key information about U.S. war efforts in Afghanistan, accelerating a clampdown on data, such as the size of the Afghan military and police forces, that indicate how the 16-year-old stalemated war is going....
Over the years, the SIGAR auditing effort has revealed many dubious practices by the U.S., including instances of contractor fraud. Since January 2016 it had published data on the number of governing districts controlled by Kabul, the number controlled by the Taliban, and the number that are contested.
John F. Sopko, head of the auditing organization, expressed disappointment that the Pentagon had forbidden release of the data on relative control of the governing districts.
“This development is troubling for a number of reasons, not least of which is that this is the first time SIGAR has been specifically instructed not to release information marked ‘unclassified’ [emphasis added] to the American taxpayer,” Sopko wrote.

Last week, U.S. President Donald Trump was in Davos, Switzerland, hobnobbing with the rich and powerful. He declared America 'open for business.' Is there anything business loves more than a perception that its hands are clean and its motives unimpeachable ... just like politicians and other purveyors of war?

Someone's son is dead? Oh, and by the way, how is Boeing doing on Wall Street?