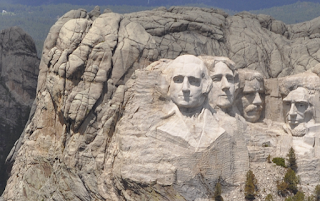 For some reason, the ponderous pundits of the past rise up in my mind this morning. It is hard to remember the pre-internet days when the likes of Henry Kissinger, Zbigniew Brzezinski, William F. Buckley Jr., or Eric Sevareid might deliver, with self-assured languor, not only the tableau of one national or world story, but also add a distinct sense that since these men believed in themselves, the viewer would be profoundly remiss if s/he failed to agree with that belief. Their deliveries all had a bit of Mount Rushmore about them. Mind you, this was in a day when television was just getting its majority footing around the country. It was a time when there were social and cultural connectives and starry-eyed kids were still told they could "grow up to be president."

Those seeking a taste of those earlier days can sample George Will in the Washington Post or elsewhere. How that man keeps from strangling on his own profundity beats the socks off of me.

Anyway, I always had the feeling that such men in the old days did not really care about the facts as much as they cared about their own ornate digestion -- rather than the viewer's -- of those facts. Yes, they were commentators, but there was always a soupçon of something extra, some egotistical little cowlick. Of course it was all sotto voce -- just a comfortable (or was it comforting?) presumption and assumption of power that should be allowed to spearhead a clear and uncluttered understanding of a situation. Upscale education, upscale intellect, upscale credibility ... and you were an idiot if you did not see it that way. Issues were not so much the issue. Or maybe I am just looking in the mirror.

I kind of miss what I always thought of somehow as arrogant assholes. Nowadays, the posturing has got the best of us and nothing is any longer educated. Everyone wants to be on Mount Rushmore. Demonstrable credentials need not apply. Facts, of course, are still given a seat in the nose-bleed section. And you have to ask now, as then, can thinkers actually think? True, there is showing off and showing off, but the veneer between clap-trap and well-dressed is thinner.

God bless the fucking internet: Not only are the facts not enough or worth digging into, now the deliverers beg for attention and beg and beg and beg until ... Wait! What were we talking about? Something about mountains, wasn't it? Mount Rushmore here I come. Have you noticed -- see pic above -- that they saved a place for me?
Posted by genkaku at 10:19 AM