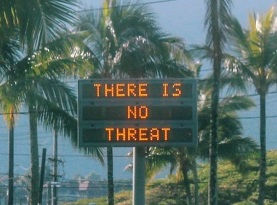 The scare-'em-to-death tactics of those who have no policy for peace was ratcheted up in Hawaii Saturday when, for about 40 minutes, thousands were advised that there was a nuclear missile bound from North Korea to their land of milk and honey and hula skirts.


For nearly 40 minutes people waited. Then came the second mobile alert: someone hit the wrong button, there was no missile.
Some people abandoned cars on the highway and others gathered in the interiors of their homes to wait for what seemed like the inevitable, a blast that would cause widespread death and destruction.
The message sent statewide just after 8 a.m. Saturday read: “BALLISTIC MISSILE THREAT INBOUND TO HAWAII. SEEK IMMEDIATE SHELTER. THIS IS NOT A DRILL.”
The Hawaii Emergency Management Agency’s administrator, Vern Miyagi, said he took responsibility for the mistake. He said officials would study the error to make sure it doesn’t happen again.

Obviously, it was enough to scare the pee down the pope's leg. Panic was understandable: Where could anyone hide and be safe and save the children and save themselves and ... well ... survive? Strangely, as in the past, no one seemed to care about the results awaiting anyone who actually did survive. Is survival actually something someone might wish for? Seriously, is it?

John Hershey's "Hiroshima," which was published in 1946, makes it clear that those who survived the nuclear bomb dropped there in 1945 were consigned to a world of ravaged anguish. Flesh slipped from bones; radiation's fallout was gruesome ... the list of awful consequences made it clear that a quick incineration might have been preferable. But no one mentions that stuff -- the hell of the heaven of survival. Wishing to survive may be a natural human instinct, but that doesn't mean survival is the best possible outcome.

The U.S. capitalized on the Cold War fears of nuclear attack:

Beginning in 1954, the entire nation took part in an annual defense drill called “Operation Alert.” For the first exercise, on June 14, 1954, the FCDA pretended that nuclear bombs had hit about 100 American cities....
During the drill, everyone was supposed to get off the street and find shelter while government officials and volunteers practiced what their duties would be in an actual attack scenario.

I remember participating in one such defense drill (late 1950's or early 1960's?) in New York. While everyone headed for his or her designated shelter during the drill, I sat outside on the steps at Columbia University and considered what it might be like if a bomb actually hit New York, if it decimated the skyscrapers that were everywhere, if the resulting rubble might not entomb those who had fled to safety in subway tunnels or other below-ground shelters. And if they did survive and did manage to dig themselves out, what world might await them? Instant incineration, however frightening, struck me as the only sane alternative. But no one seemed or seems to want to consider the fallout from the fallout... no food, no water, no medicine, no help that could possibly help enough. Which is worse, dying or waiting to die?

The flashback takes on a new rainbow of color with the likes of Donald Trump as president. Bellicosity is one of his trademarks. Bad-mouthing the North Koreans and setting up other straw men to replace an earlier day's Cold War villains ... it's all a wonderful diversion from the needed jobs, improved health care, infrastructure repair and other peaceful pursuits that take time and patience and tenacity and responsibility. If we're at war -- and Kim Jong Un seems a less deranged adversary than some -- then thinking things through can be set aside: We need a bigger and better military establishment; we need a better-heeled bevy of industrial giants bellying up to the federal trough; we need to wave the flag and rattle the sabre and ... what better way to accomplish all that than to scare the pants off the people who pay the bills?
Posted by genkaku at 10:48 AM