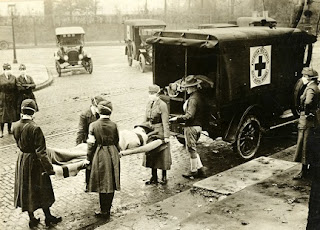 A hundred years after the Spanish Flu infected an estimated 500 million worldwide and killed between 50 and 100 million, the latest yearly bout of flu appears to be picking up steam.


NEW YORK (AP) — The flu season in the U.S. is getting worse.
Health officials last week said flu was blanketing the country but they thought there was a good chance the season was already peaking. But the newest numbers out Friday show it grew even more intense.
“This is a season that has a lot more steam than we thought,” said Dr. Dan Jernigan of the U.S. Centers for Disease Control and Prevention.
One measure of the season is how many doctor or hospital visits are because of a high fever, cough and other flu symptoms. Thirty-two states reported high patient traffic last week, up from 26 the previous week. Overall, it was the busiest week for flu symptoms in nine years.

The 1918 flu epidemic killed my mother's mother. It also posed a conundrum for the U.S. government which was sending soldiers to fight in World War I by the only means they had ... closely-packed troop ships in which the chances of contracting the disease rose. For this reason, I think I remember reading, news about the pandemic was kept on the public down-low. The internet was not yet a twinkle in its daddy's eye.