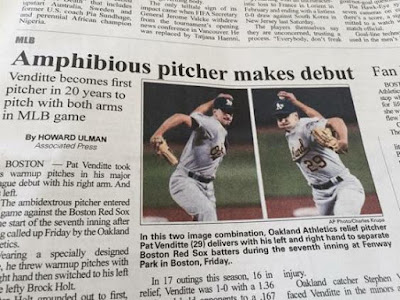 "Nucular" (used in place of "nuclear"), "axsed" (to replace "asked") and "jagwires" (instead of "jaguars") are three malapropisms that leave me unable to see how anyone ever got from the actual word to its popular, limping cousin. "More importantly" I can sort of comprehend as sounding cooler (and more adverbial dontcha know?) than "more important."

When I was a kid, advertisements on the backs of comic books -- besides being for Charles Atlas muscle-building and Red Ryder B-B guns -- included a book that would improve your vocabulary: "Use a word ten times in a day and it is yours," the ad suggested ... which in turn suggested that an improved vocabulary might contribute to a more august lifestyle.

In ninth-grade high school, one guy in the clan I hung out with, took a test and was found to have the vocabulary of a 35-year-old business man. We in the clan were all pretty wowed, but nonetheless felt a lingering sympathy for Tony, whose sole, burning, and almost single-minded desire was to get laid. Getting laid was an uphill chore since we all attended an all-male high school and Tony was not gay. (Yes, he eventually managed it.)
Posted by genkaku at 11:55 AM