some journalistic warp and weft 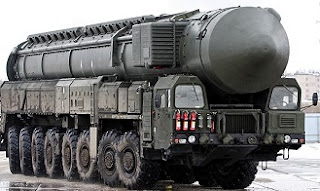 I'm not sure that "consoling" is exactly the right word to apply to the Russian military drills announced Monday. But the rocket exercises seem to "fit" with this morning's and other recent news.


-- ABOARD THE PAPAL PLANE (Reuters) - Pope Francis said on Monday he was really afraid about the danger of nuclear war and that the world now stood at “the very limit”.
His comment, made as he flew off for a visit to Chile and Peru, came after Hawaii issued a false missile alert that provoked panic in the U.S. state and highlighted the risk of possible unintended nuclear war with North Korea.
Asked if he was worried about the possibility of nuclear war, Pope Francis said: “I think we are at the very limit. I am really afraid of this. One accident is enough to precipitate things."

-- BELGRADE, Serbia (AP) -- Japan's prime minister says his country is seeking to strengthen relations with Serbia and other Balkan countries....
Abe also said North Korea is "a great danger" and noted that its missiles have the capacity to reach Belgrade.

-- JERUSALEM (AP) -- Israeli leaders slammed Palestinian President Mahmoud Abbas Monday for a fiery, invective-filled speech against President Donald Trump, in which he proclaimed the U.S. role as arbiter of the Mideast conflict over, attacked the administration's envoys and described Israel as a colonial conspiracy.
Israeli Defense Minister Avigdor Lieberman said Abbas had "lost his senses" and had given up on the prospect of peace negotiations in favor of open confrontation with both Israel and the United States. Israeli Education Minister Naftali Bennett, head of the pro-settler Jewish Home Party, said the speech represented Abbas' swan song.

-- Turkey’s president, Recep Tayyip Erdoğan, has accused the US of forming a “terror army”, after Washington announced plans for a 30,000-strong force inside Syria to protect territory held by its mainly Kurdish allies.
On Sunday, the US-led coalition said it was working with its Syrian militia allies, the mainly Kurdish-led Syrian Democratic Forces (SDF), to set up the new border force.

-- Ending one of the fiercest jetliner-order competitions in recent memory, British budget carrier easyJet will buy jetliners from Europe's Airbus instead of adding to a fleet that now consists entirely of planes made by U.S.'s Boeing Co. [a military hardware provider]

-- WASHINGTON, January 8  - The Trump administration is nearing completion of a new "Buy American" plan that calls for US military attaches and diplomats to help drum up billions of dollars more in business overseas for the American weapons industry, going beyond the assistance they currently provide, US officials said.
President Donald Trump as early as February is expected to announce a "whole of government" effort to ease export rules on purchases by foreign countries of US-made military equipment, from fighter jets and drones to warships and artillery, according to people familiar with the plan.

If you can't convince 'em, then scare 'em: The "terrorism" is not within: It's out there, waiting to pounce. And Bernie Sanders shouts into the wind ...   yes, I know that at least he's shouting:


If we stand together against powerful special interests we can eliminate poverty, increase life expectancy and tackle climate change.

Right, and if pigs had wings, I'd be able to find my American flag lapel pin. I'm so sick of being sick of stuff. Maybe I've just turned into the arch-typical Trump enthusiast.
Posted by genkaku at 12:31 PM