vacationing with Donald and Bibi 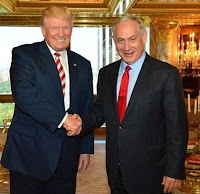 Would it be possible to send U.S. President Donald Trump and Israeli Prime Minister Benjamin Netanyahu to a remote and uninhabited Pacific island where the two of them could unreservedly pat each other on the back and leave the rest of the world out of their machinations? They deserve each other.

JERUSALEM (AP) -- The ruling Likud Party's central committee has unanimously endorsed a resolution calling for the annexation of Israeli West Bank settlements.
Although the committee is only an advisory body, its decisions reflect the prevailing opinions in Prime Minister Benjamin Netanyahu's party.
Several leading politicians, including lawmakers and Cabinet ministers, joined Sunday night's vote to "impose Israeli law on all liberated areas of settlement in Judea and Samaria." Netanyahu remained silent.
Most of the international community considers Israel's West Bank settlements, built on land captured in the 1967 Mideast war, illegal.
The Palestinians called the vote "an outrageous violation" of international resolutions.
The vote followed President Donald Trump's decision to recognize Jerusalem as Israel's capital - a move that has drawn heavy international criticism.